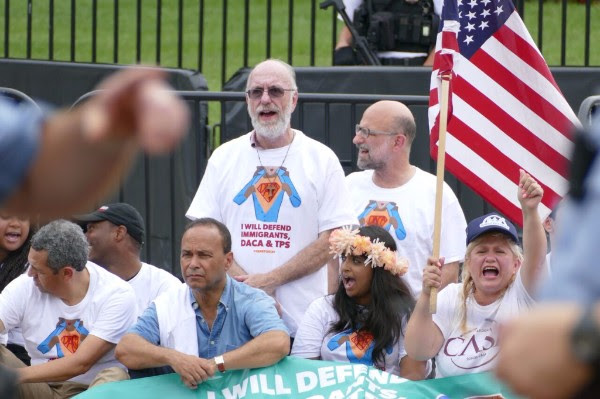 NAKASEC has many allies in our work for just immigration policies. Leaders from the faith community have been crucial to our success.

One of these leaders is Patrick Carolan, Executive Director of the Franciscan Action Network, who first learned about NAKASEC during our 2013 Fast for Families. He and FAN are now participating in the 22-day DREAM action vigil in Washington, DC.

Many other faith leaders have been called to join Patrick at the vigil to show their support for immigrant communities. There are prayer vigils in front of the White House and every evening, people from every faith community have come to lead the prayer.

“I have a strong belief that we are all connected. As Catholics, we say that I’m part of the body of Christ, but we don’t really believe it because if we did we wouldn’t be standing in front of the White House, we would be welcoming these young people in. We need to raise awareness about what could happen to DACA and the TPS.”

Can you help NAKASEC defend DACA by making a donation today?

The Deferred Action for Childhood Arrivals (DACA) program and the Temporary Protective Status (TPS) program are in danger. Without them, hundreds of thousands of undocumented people and other young immigrants could lose their jobs, have to cut their educations short, and be deported—often to countries that they don’t really even know.

“These young people are here going to school, becoming productive members of our country, some of them don’t know any other country . . . . It goes against our faith and everything we stand for to deport them.”

The issue is a personal one for Patrick, whose parents were immigrants from Ireland who arrived in the United States in 1950. “My older brother was born in Ireland,” he says. “Had my parents not been approved to stay here, he would have been DACA.”

Patrick credits his mother with instilling a deep sense of justice in him. She once told him, “This is God’s Earth, and we’re all just immigrants, and if we don’t welcome everybody into our home, God will never welcome us into Her home.”