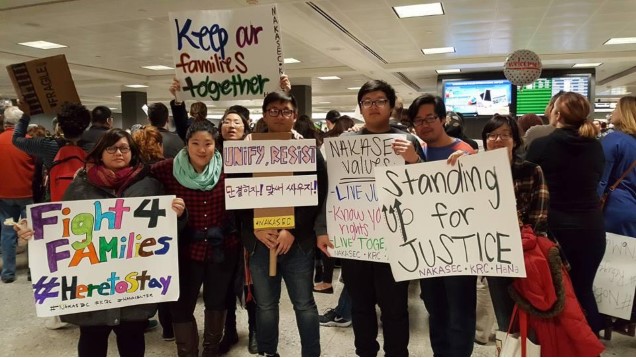 Korean and Asian Americans joined a public action at Dulles Airport in the Washington DC area on Saturday, January 28, 2017, to welcome individuals impacted by President Trump’s executive order and to oppose the Muslim ban.

NAKASEC and its affiliates, the Korean Resource Center of Los Angeles and Orange Counties and the Korean American Resource & Cultural Center of Chicago denounce the Trump administration’s continuing assault on immigrant and refugee communities with an executive order signed on Friday, January 27th, 2017, that effectively bars refugees and Muslims from entering the United States.

The executive order suspends the entry of refugees from all countries for 120 days, prevents entry of individuals from Iran, Iraq, Libya, Somalia, Sudan, and Yemen for 90 days and places an indefinite hold on the admission of Syrian refugees. Other countries may be added to this list at any time, as determined by the Secretaries for the Department of State (DOS) and the Department of Homeland Security (DHS). The order also caps the total number of refugees who can enter the U.S. this year at 50,000, which is less than half permitted in 2016.

The executive actions signed last week are deeply disconcerting as it demonstrates that the incoming administration lacks the ability to make smart policy judgments and basic compassion for the sufferings and struggles of everyday people. Having propagated lies about Muslim Americans and refugees, President Trump is now targeting them in actions that are racist, xenophobic, and unacceptable. Moreover, denying entry to refugees fleeing war and persecution is profoundly inhumane and un-American.

As Korean and Asian Americans, as immigrants, we reiterate our pledge to work in strong partnership with our brothers and sisters from the indigenous, Muslim, Black, and other targeted communities to protect our human rights and keep all families together, safe and strong.

BREAKING: We will continue to monitor and educate Korean and Asian American communities about the ongoing developments. As of Saturday, January 28, 2017, several national advocacy organizations succeeded in obtaining a nationwide temporary injunction that blocks the deportation of all people stranded in U.S. airports under the new executive order.