Reflections on Election Results and 2016 Priorities 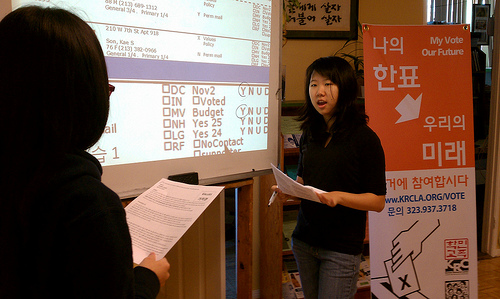 Annandale, Virginia— On November 3, Virginia voters hit the polls to elect all 140 members of the General Assembly and other seats including the school board, county board, and sheriff offices. This election Virginians elected 19 Democrats and 21 Republicans in the State Senate and 34 Democrats and 66 Republicans in the House of Delegates. Fairfax County, which is where NAKASEC concentrated most of its voter engagement efforts, had a voter turnout rate of 30.4%. With voter turnout in state elections traditionally being low, National Korean American Service and Education Consortium (NAKASEC), Virginia Coalition of Latino Organizations (VACOLAO), Virginia Coalition for Immigrant Rights (VACIR), and other partner organizations in Virginia have been actively engaging eligible voters to get out the vote and make the Asian American and Latino vote count this election. The highest voter turnout was in the Dranesville District. This effort will continue to build as we near the 2016 presidential elections.

For a list of poll results, please visit: http://results.elections.virginia.gov/vaelections/2015%20November%20General/Site/GeneralAssembly.html

Volunteers made 1,175 calls to Korean American first-time voters in Fairfax County, a majority of whom confirmed that they would be voting on November 3. Of the voters we spoke to regarding the Fairfax County budget cuts, all but one said they opposed these budget cuts and supported investing in public education to meet student needs. Voters were reminded about the importance of strengthening the Asian American electoral power by voting on election day and provided with NAKASEC’s Korean and English hotline for any questions or concerns. NAKASEC’s voter registration and phone banking activities acquired 15 media hits in Korean American and Chinese American media outlets in Virginia.

Max Kim, Korean American student in Annandale, Virginia, said: “The Virginia elections are over but our efforts to outreach to the Korean and Asian American community around ending the budget cuts and supporting immigrant families will continue through 2016 and beyond. The Fairfax County budget cuts cause too much damage to important afterschool, music, and arts programs and affect students by increasing classroom size and make teacher retention difficult. I and others in our youth program remain dedicated to educating the community about this and other important issues.”

NAKASEC, VACOLAO, VACIR and many Virginia organizations also renewed their commitment to engaging with community members around immigrant rights and voting and to increasing the Asian American, Latino, and broader immigrant voice in Virginia. In 2016, NAKASEC will continue to push for the implementation of the Deferred Action for Parents of Americans and Lawful Permanent Residents (DAPA) and expanded Deferred Action for Childhood Arrivals (DACA) programs, as well as the long-term goal of immigration reform. DACA expansion and DAPA remain at the forefront of the immigrant rights movement now and are anticipated to be contentious issues in the 2016 Presidential elections.

With the upcoming anniversary of President Obama’s announcement on immigration reform, expansion of Deferred Action for Childhood Arrivals, and Deferred Action for Parents of US Born Children and Lawfully Permanent Residents, VACOLAO will lead community members in a march across the bridge from Arlington to the White House for the anniversary and highlight the need for the implementation of these programs. NAKASEC will also host an information session regarding DACA Expansion and DACA that was announced in 2012 on November 20th, 2015 at 6 PM at our office, 7006 Evergreen Court, Suite 200 Annandale, VA 22003.