STATEMENT: Goodlatte’s Anti-Immigrant, Anti-Family Bill Exposes How Out of Touch House Republicans Are with America 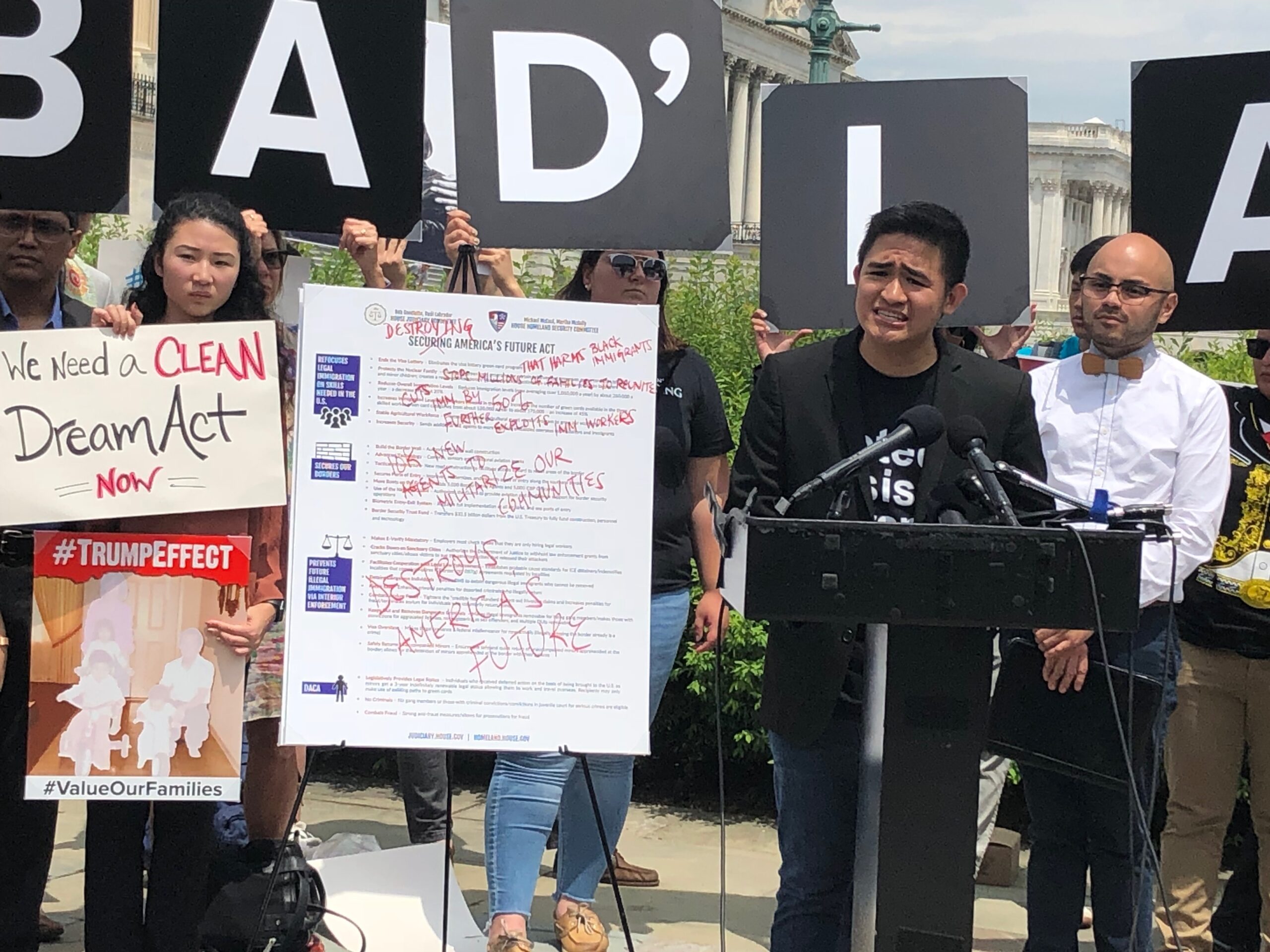 Goodlatte’s Anti-Immigrant, Anti-Family Bill Exposes How Out of Touch House Republicans Are with America

“Family separation and mass deportation have become the end goals for these people who control Congress” says Immigrants, Families, and Faith Leaders

Washington, D.C. —  Speaker Paul Ryan has promised his caucus they will vote on at least two anti-immigrant bills next week, as House Republicans come to a stand-off on a Dream Act last night. Outside the Capitol steps, U.S. Representatives Judy Chu (CA-27), Jim Costa (CA-16), Rep. Barbara Lee (CA-13),  and Jimmy Gomez (CA-34) joined dozens of immigrants, families, Dreamers, and their allies to oppose the Goodlatte bill, or any other legislation that gives fuel to Trump’s mass deportation machine.

The Value Our Families coalition—led by Asian Americans Advancing Justice, Church World Service, and The National Korean American Service & Education Consortium (NAKASEC)— sponsored dozens of immigrant activists, families, and faith leaders from 12 states to lobby their Members of Congress in Washington, DC to urge them to oppose the Goodlatte bill and any other provisions that aim to stop millions of families from reuniting.

With signs opposing Rep. Goodlatte’s bill, some read, # “B A D” L A T T E and giant family photos with certain members whited out to represent the anti-immigrant, anti-family legislation,

Greg Cendana from the Value Our Families told the crowd, “Even though none of these bills will become law, House leaders are using the Goodlatte bill to attack our families and our communities and prove how racist and like-Trump they are. They know it’s a non-starter for us. Yet they continue to use it to escalate their attacks. Goodlatte’s bill is falsely named, Securing America’s Future Act when, in fact, it’s Destroying America’s Future.”

The Goodlatte bill would create a permanent underclass of immigrant young people, stop millions of families from reuniting with their parents, grandparents, children, and loved ones, eliminates the diversity visa program which would disproportionately harm Black immigrants from Africa, hire 10,000 more border agents to militarize our communities, further exploit farmworkers, strip due process and protections from children and asylum seekers and most of all, it builds Trump’s wall and empowers his mass deportation machine

Below are remarks from today’s additional speakers:

Anthony Ng, an immigrant from the Philippines, is the Immigrant Rights Policy Manager at Asian Americans Advancing Justice-Los Angeles:

“Families are the bedrock of our communities, our society, and our country. Many of us succeed and thrive in our lives due to their unconditional love and support. The Administration’s attacks on immigrant families by separating children from their parents at the border, proposing cuts to family-based immigration, and lack of action on DACA and TPS seek to fundamentally change our national identity and debilitate our communities. Congress needs to protect immigrant families as they would protect their own. Our families and country deserve better than this.”

Adrian Reyna, Director of Membership for United We Dream:

“A DACA fix isn’t a DACA fix if the end result is immigrant youth losing their parents or if new barriers get built to cut us off from our family members. The Goodlatte bill, or legislation to enable Trump’s mass deportation agenda, is not a DACA fix – it is a racist sham.

“To protect immigrants in this time of incredible danger, Members of Congress need to reject the Goodlatte bill and pass a clean Dream Act – legislation to protect immigrant youth without hurting other immigrants. And they must vote against any and all funding for the deportation force who are hunting down our people.”

“We want a clean DREAM Act, that has been and remains our call. Plain and simple the Goodlatte bill is not that. Instead it is blatant attempt to further warp the immigration system to keep people of color out. The diversity visa program in particular has been scapegoated in order to further the Administration’s plan to demonize African immigrants.”

“As a DACA recipient, as a mother and as a Pastor who serves an immigrant community, I came from Houston, Texas all the way to Washington DC to defend family unity. We cannot stand for more family separation and we will not let this anti-immigrant Goodlatte bill pass that tears apart our family-based immigration system. Family sponsorship is the only hope I have at adjusting my status to stay with my family and my baby. Our faith communities will continue to remind people of their God given worth as we together work to pass the Dream Act and protect the value of our families.”

“What we need first and foremost is a permanent solution to protect young immigrants from deportation. But instead of looking for real solutions to a crisis created by President Trump, some in Congress want to further militarize the southern border. The Goodlatte bill does nothing to secure permanent protections for Dreamers while wasting billions in taxpayer money to further separate families, build walls and hire thousands of unaccountable border agents, endangering the lives of the 15 million people who call the southern border region home.”

Esther Jeon, Immigrant Rights Fellow for NAKASEC Chicago and is currently a senior at Harvard:

“82% of AAPI immigrants are here because of family based sponsorship and any cuts to it are a direct attack on our community. Often, our parents, siblings, and family members make us into who we are today and to remove that necessary support is un-America, cruel, and inhumane. We are here to show Congress and this administration that we will not tolerate any cuts to family reunification and we won’t stop until our families are here to stay!”