RELEASE: America Should Be Built on Dreams, Not Hate 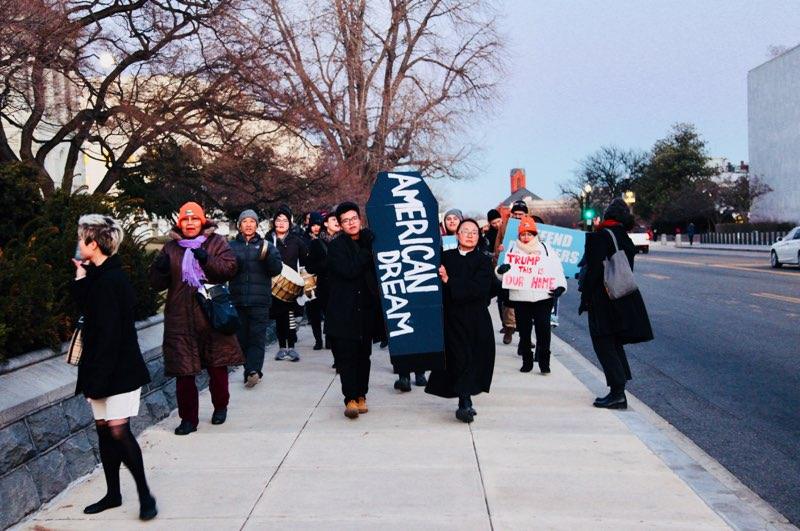 America Should Be Built on Dreams, Not Hate

Upon conclusion of President Trump’s address, Cho remarked, “America is a land of dreams. Trump and Congress are trying to take those very dreams away from us. As a result, our communities are being placed directly in harm’s way. The Trump administration has implemented a Muslim Ban, cancelled the Deferred Action for Childhood Arrivals (DACA) program, eliminated Temporary Protected Status (TPS) programs, and inflicted numerous other racist attacks against our communities. This is what we have been suffering for the last year; this is the Community’s State Of the Union. We are tired of living in a society where our very existence must be fought for every single day. We, undocumented youth, demand citizenship for all, including for our parents and families. We oppose the border wall, elimination of the diversity visa, and any cuts to family based sponsorship. The President and Congress need a moral wakeup call, and we are here to be that alarm clock. I say to President Trump, listen to the Community’s State of the Union.”

Christine Park, a DACAmented young leader with the Korean Resource Center (KRC), stated, “It was truly upsetting to see the direction that our country is going in and to listen to Trump’s hateful rhetoric that criminalizes our communities. Instead of protecting young people, our nation’s leaders are using us as political pawns for their racist agendas. We are a nation of dreams, and no bigoted President can take away my dreams. Watching the State of the Union made me angry, yet empowered to clap back. He doesn’t want to make America great again. He wants to make America White again.”

Right before President Trump’s State of the Union Address, undocumented youth, faith leaders, community members and allies held a mock funeral procession with a coffin that read “American Dreams” outside the Capitol. This procession symbolized the killing of young people and their families’ dreams by Trump’s White House Framework on Immigration Reform & Border Security. It also highlighted the resilience and strength of community members, and the urgency of passing a clean DREAM Act now, protecting family reunification, and citizenship for all.