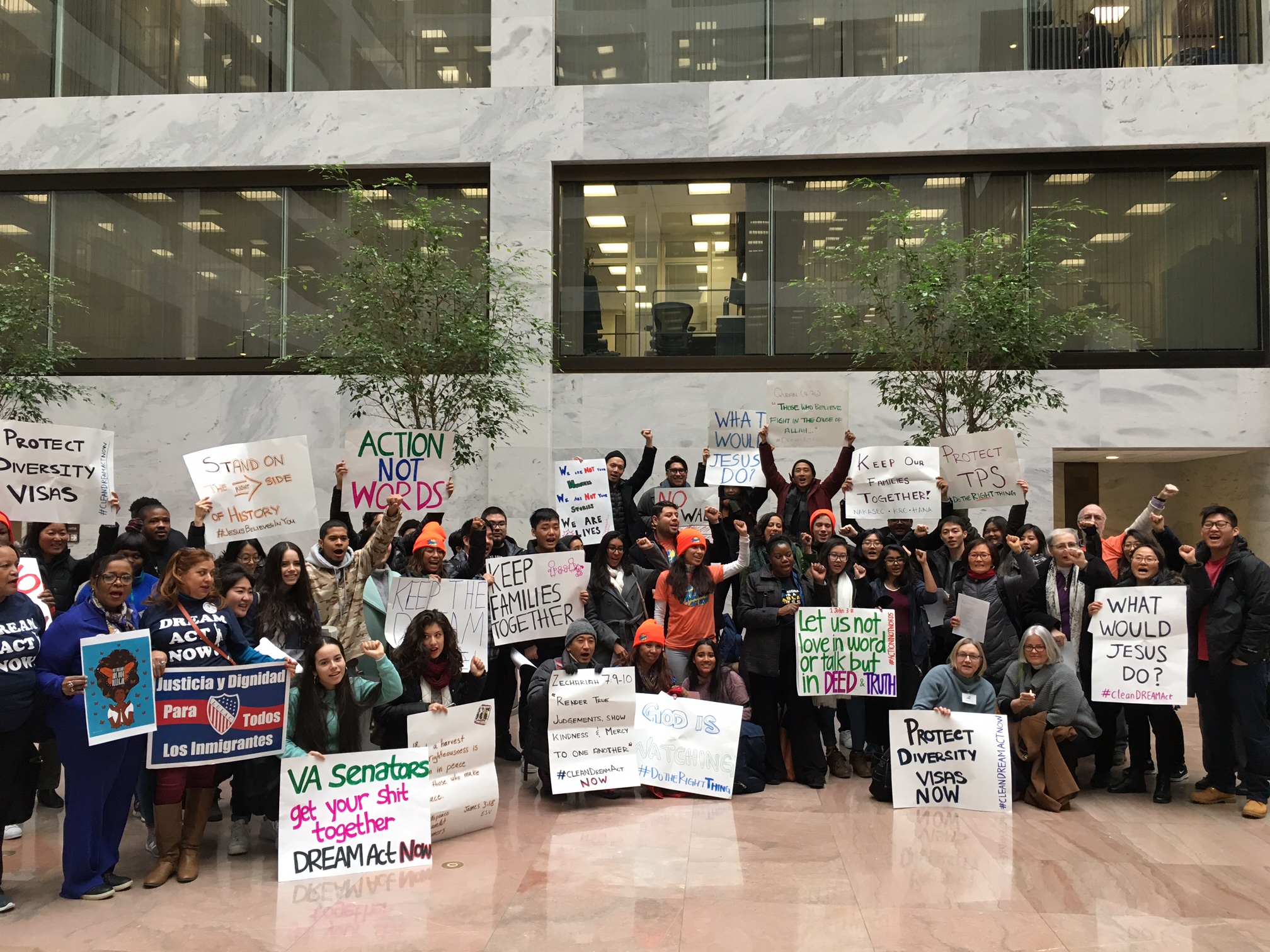 After Months of Grassroots Actions, VA Senators Kaine & Warner Commit to Use Their Leverage to Protect Immigrant Youth
Both U.S. Senators from Virginia Declare Their Intent to Vote No on January 19 Spending Bill Without the Dream Act

Washington, D.C. – Today, Virginia’s two U.S. Senators: Tim Kaine and Mark Warner, released a statement publicly committing to vote ‘NO’ on the January 19 spending bill if it does not include the Dream Act — a bipartisan bill that would protect more than 2 million immigrant young people from deportation and create a pathway to citizenship.

The commitment comes after tremendous pressure by hundreds of immigrant leaders from the National Korean American Service & Education Consortium (NAKASEC), CASA in Action, and United We Dream who took over their district and D.C. offices, staged a demonstration outside the Governor Northam’s Inaugural Gala where Sen. Kaine and Warner were guests, canvassed the neighborhoods of both Senators to speak to their neighbors, led lobby visits and made thousands of phone calls and collected petitions.

Across the country, Democrats have been under increasing pressure to use all of their leverage to protect immigrant youth and pass the Dream Act. So far, over 15,000 young people have lost their protection from deportation since the Trump administration first rescinded Deferred Action for Childhood Arrivals (DACA) program on Sept. 5, 2017.

This afternoon at 4pm EST, immigrant community leaders will go to many of the state offices of Sen. Kaine and Warner to acknowledge their decision to vote No on the spending bill to protect immigrant youth; more information on location of these visits below.

Jung Bin Cho, a DACA recipient from Virginia and community leader with NAKASEC, said:
“We want to be clear that Senator Tim Kaine and Senator Mark Warner’s decision to finally be on the right side of history is a direct result of undocumented youth-led, sustained organizing and direct actions. For the past 5 months, NAKASEC and other grassroots organizations applied constant pressure on Senators Kaine and Warner to go beyond words about supporting immigrant youth, and instead deliver with concrete action. That happened today. “Although Senators Kaine and Warner voted yes on the continuing resolution last December, we are proud to see that our work, stories, and passion helped them do the right thing this time around. We will continue to organize and advocate for a clean Dream Act — one that does not compromise the safety of our parents and border communities or threaten family immigration and diversity visa program.”

Luis Aguilar, a DACA recipient from Virginia and organizer for CASA in Action, said:
“Our communities are well organized. We proved it back in November in the Gubernatorial elections and we are demonstrating our power once again today. We expect our elected officials to walk the talk. And today, Senators Kaine and Warner demonstrated that they are willing to stand with us in this by stating they are voting no on the spending bill if it does not include the Dream Act.”

Bruna Distinto, potential Dream Act beneficiary and local leader with United We Dream, said:
“For weeks immigrant youth like me who would qualify for the Dream Act have been going to Senators Kaine and Warner’s state and D.C. offices calling on them to be Dream Heroes who put their words into actions. In December, when they voted for a spending bill that did not include the Dream Act, I felt devastated: my education, my ability to buy my parents their dream house, and my safety were all on the line.“Today I feel energized knowing that our stories pushed Senators Kaine and Warner to stand on the right side of history by committing to vote NO on any spending bill that does not include permanent protections for immigrant youth.”

Visit Details for Today, January 18 – all happening simultaneously at 4pm

Founded in 1994, the National Korean American Service & Education Consortium (NAKASEC)’s mission is to organize Korean and Asian Americans to achieve social, economic, and racial justice.  NAKASEC maintains offices in Annandale, Virginia and Los Angeles, California and has affiliates in Chicago (Hana Center) and Los Angeles and Orange Counties (Korean Resource Center).  For photos and videos, please follow us on Facebook and Twitter (@nakasec).

With 97,000+ lifetime members, CASA in Action is the largest electoral organization fighting for immigrant rights in the Mid-Atlantic region.