NAKASEC, KRC, and KRCC Partner With the Historic Women’s March on Washington 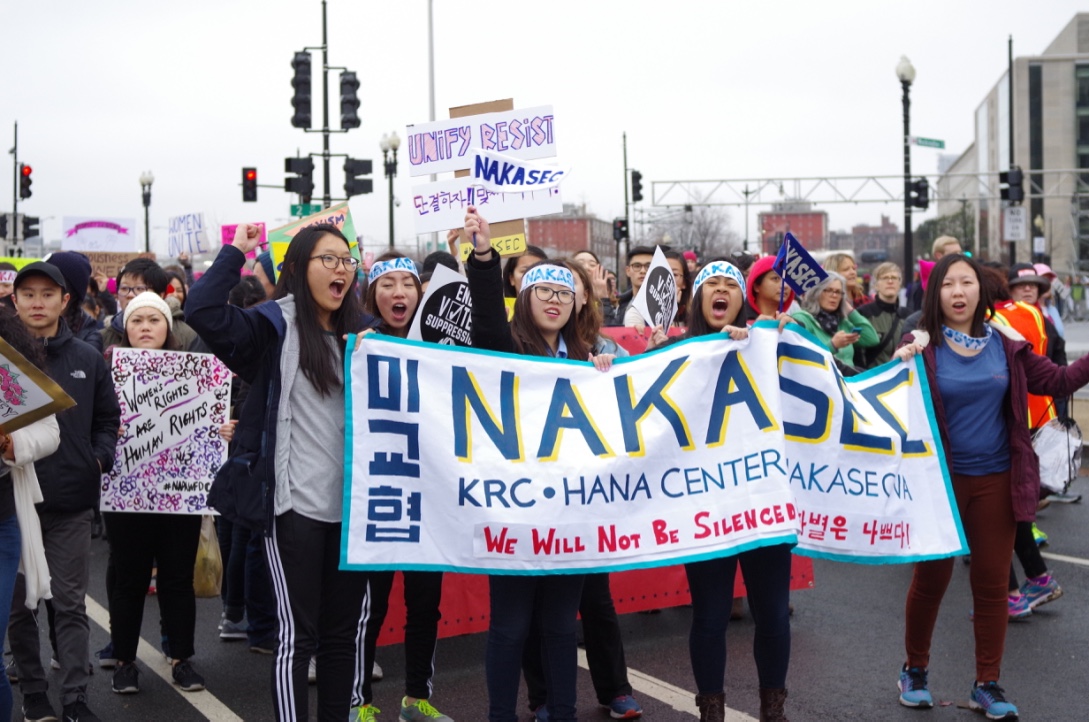 NAKASEC, KRC, and KRCC Partner With the Historic Women’s March on Washington

The election of Donald Trump to our nation’s highest office opened the door to a dangerous new period for women and girls, immigrants, communities of color, and working people — the very communities in which NAKASEC and its affiliates are rooted.  The lives and spirits of Korean and Asian American girls and women are threatened like never before.  Korean and Asian American girls and women actively challenge sexism everyday, but we are not usually recognized for doing so.  To send a bold message to the new administration that women’s rights are human rights, NAKASEC, KRC, and KRCC organized a contingent of over 65 Korean and Asian American girls and women, mothers, daughters, sisters, friends, and poongmul (Korean drumming) performers to project our voices and drum down Independence Avenue as we join this women’s movement for equity.
We marched to protect women’s rights, to challenge the racist and xenophobic attacks against women of color, and for the bigger movement that ultimately aims for women to be treated equally in all arenas.

Dae Joong Yoon, Co-Executive Director of NAKASEC and President of KRC, said: “NAKASEC has always believed in the leadership of women, and we firmly believe true democracy values and respects every person’s voice, including those of women.  As an individual, I myself am participating in the sister march in Los Angeles because I believe that Korean and Asian American men should actively support women’s rights by breaking down prescribed gender roles and fighting for equity within our homes, communities, and society.”

Inhe Choi, Executive Director of KRCC and Board Member of NAKASEC, said: “The new president came into office after running on a platform of hate, fear, and division.  Countless attacks against marginalized groups alert us to monitor how the new administration will approach policies that impact people like myself, women of immigrant and color communities, and next generation of young people.  We believe it is only right for us to join this march as a united force to demonstrate that we women are strong and organized; that we will stand up and continue to build our power to achieve justice for all.”

Hyon Ko, Board President of KRCC, shared: “I am participating in the Women’s March in Chicago with my husband and 20-month old daughter.  We are marching because we need to lift all our collective voices in support of policies that strengthen families and communities.  We are excited as immigrants and minorities to participate in this event.  We need to send a strong message to our elected officials that we want a more just and equitable world and that they are accountable to us, the people, to help advance that cause.  We are honored and compelled, now more than ever, to participate.”