Call to Action: Call ICE To Free Nan-Hui Jo to be reunited with her daughter! 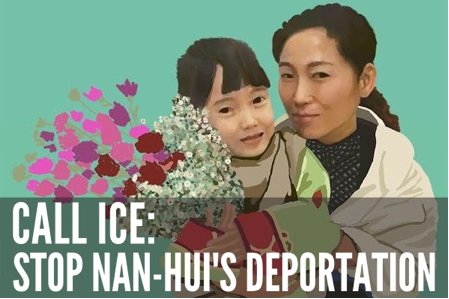 Call to Action: Tell ICE to Stop Separating Nanhui Jo from her daughter!

I am calling on you to take action so that Nan-Hui Jo, an immigrant mother from Korea, can be with her six-year-old daughter, Vitz Da. Nan-Hui is currently being held in detention and could be deported and separated from her daughter at any moment.

Nan-Hui Jo is an undocumented single mother from Korea and a survivor of domestic violence. She has spent 11 months in jail for daring to flee her abuser. Now she must fight against deportation proceedings, which could permanently separate her from her beloved daughter. It is clear that Immigration and Customs Enforcement (ICE) has wasted no time to deport her; upon taking her into custody, they immediately filed a motion to cancel her immigration court hearing, which has been set for August.

We need you to call and tell ICE that it is wrong to separate Nan-Hui Jo from her daughter and demand that she be released from detention immediately!

“I am calling to ask Director Saldana for the immediate release of Nan-Hui Jo (A-098 906 641). Ms. Jo is a survivor of domestic violence and has a VAWA petition pending. She has an immigration hearing set for August. She should be released to be reunited with her daughter, who has not seen her mother since last July. Please release Ms. Jo without initiating deportation proceedings against her. Thank you.”