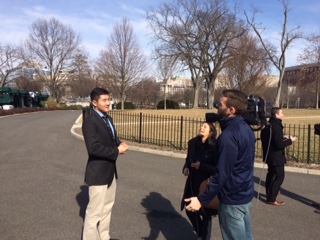 Bati Tsogtsaikhan and five other DREAMers share stories of how DACA has positively affected their lives with President Obama
** OFFICIAL PHOTO: http://instagram.com/p/ysmz02QivB/?modal=true **

WASHINGTON, D.C.— Today, President Obama invited six young leaders, who received Deferred Action for Childhood Arrivals (DACA) to the White House to share stories about how they have benefited from DACA and emphasize the importance of protecting the community’s recent win to expand DACA and create a similar program for parents of U.S. citizens and lawful permanent residents, Deferred Action for Parents of Americans and Lawful Permanent Residents (DAPA). Bati Tsogtsaikhan, a fellow at the National Korean American Service and Education Consortium (NAKASEC), was one of the DACA recipients invited to the Oval Room.

Bati Tsogtsaikhan shared: “DACA has allowed me to work legally and drive and made school more affordable. With DAPA, my parents would be able to work legally, like me, which means they can get better paying jobs and take care of my brother. Life would be better for all of us because my whole family could stay together in the United States legally. I told the President that I want others to experience these same benefits and am committed to working with NAKASEC and my community to protect DACA and DAPA. No hard working family deserves to live a life in fear being separated by deportation.”

Bati moved to the United States with his parents at the age of 10. He graduated from Yorktown High School in 2011 and then received his associate’s degree in business administration from Northern Virginia Community College in 2013. He is focusing on protecting in-state tuition in Virginia, assisting with DACA renewals, and preparing for DACA expansion and DAPA through his fellowship at NAKASEC. Currently, he is pursuing a Bachelor of Science degree in Finance at George Mason University. He also works part-time as a mover at Two Men and a Truck on weekends.

Dae Joong (DJ) Yoon, Executive Director of NAKASEC, said: “Today, the President made a powerful statement by inviting our young leaders to share stories reinforcing why deferred action programs are successful in the absence of a permanent solution. We are so proud of young leaders like Bati who are living examples of why we need to work together to protect all hardworking immigrant families. Once again, we urge those members of Congress, who are trying to undermine the executive actions on immigration, to stop playing politics and have a heart for immigrant families. We need elected officials who will demonstrate true leadership by standing with immigrant families and passing comprehensive immigration reform.”