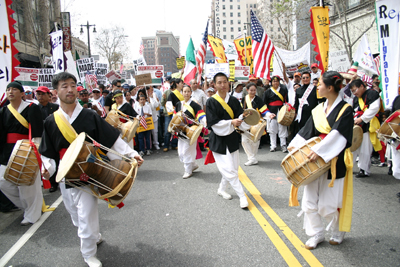 Last week, the Washington Post interviewed me and other Deferred Action for Childhood Arrivals (DACA) recipients about the general impact that DACA has made in our lives in the past year. DACA is an executive order made by President Obama to give temporary relief to qualifying undocumented immigrants who arrived in the United States at a young age. Towards the end of the interview, the Washington Post correspondent asked us some tough questions that are often brought up during political debates on immigration. The one question that really stumped me was, “What is your response to people who accuse immigrants of taking American jobs?”

I’ve often heard this argument made in the media, but it was never something that I personally took the time to think about or research. I couldn’t seriously consider that standpoint without chuckling to myself and thinking about this South Park skit. As someone who began working at the age of 16 to pay for college, I always believed that there was a way to make money as long as I was determined and persistent. My co-workers never made me feel like a thief who stole an American citizen’s opportunity for a better life. That warm welcome meant that working while studying in school would be the norm for me.

In my experience, the restaurants where I was employed over the years all had high turnover rates, and we constantly sought employees to take up the unfilled positions. These jobs were often simply a pit stop for college students and recent high school graduates who always left to pursue their careers. Consequently, undocumented immigrants with less formal education became the base workers who stuck around for the long haul. Were immigrants like us given work permits and citizenship to seek higher-wage jobs, study after study conducted by the nation’s top economists confirm that the economy would grow thanks to a higher demand for consumer products. To be more specific, an additional 203,000 jobs would be created annually (source).

Additionally, over the years, I noticed that a large chunk of my paycheck went to Medicaid and Social Security, not a penny of which I would qualify to regain as an undocumented immigrant. As it turns out, undocumented immigrants contribute between $7-8 billion annually in social security funds (source). We contribute to the economy in ways that the media and anti-immigrationists continue to overlook.

After receiving my work permit through DACA, I found better paying jobs that didn’t take advantage of my immigration status for exploitation. I work fewer hours and earn more money, which gives me more free time to study in school, find a hobby, and even write a blog. If you don’t trust fancy statistical research findings by statisticians and economists, look to me and my friends as proof that a work permit does not form a black hole in the job market. I would be happy to help anyone find a job; I just can’t guarantee you will want to work there for long.

Bati Tsogtsaikhan moved to the United States with his parents from Mongolia at the age of 10. Currently, he is pursuing a Bachelor of Science degree in Finance at George Mason University. A DACA recipient, Bati is interning at NAKASEC focusing on in-state tuition in Virginia and assistance with DACA renewals. He is interested in judo as a hobby and also enjoys trips to amusement parks.