Recently, I have been noticing a typecast trend in the media … KOREAN CHRISTIANS.  Although plenty of caricatures of fanatic Christians have been made for decades, it was interesting see a number of Korean characters that also happened to be Christian. As shown in this post, examples such as Mrs. Kim in Gilmore Girls, Pastor Jin in Don’t Trust the B in Apt 23, and by the Korean Jesus references in 21 Jump Street, it is understandable that Korean churches influenced by migrant culture may be seen in an almost-eccentric, stereotypical all-Koreans-are-Christian light.

South Korea is the second largest missionary-sending country in the world after the United States.  And although only 29.2% of South Koreans profess to be Christians (the majority, 46.5% of South Koreans practice no religion), 2012 Pews Research reports that 71% of Korean Americans identify themselves as “evangelicals or born-again Protestants.” This translates to 131,000 Korean Americans belonging to either the Southern Baptist Convention or the Presbyterian Church (U.S.A.), two of the most conservative evangelical denominations and another 90,000 to the Catholic Church.

David K. Yoo and Ruth H. Chung, in Religion and Spirituality in Korean America, assert that the contributing reason as to why so many Korean American families may convert to Christianity is because of many churches’ ability to recognize immigrant needs as well as their “communal nature.” And in God’s New Whiz Kids?: Korean American Evangelicals on Campus, written by Rebecca Kim, says that “the desire for majority status (to have power in one’s social environment) interacting with marginalization (denial of opportunity by the majority)” is also one the many reasons why Korean college students will choose to hang out with their “own group” even within a multicultural environment in many universities.

For many migrants all over the world, ethnic churches have served as community centers.  It is a place where common understanding of culture and identity come into place, bonded by mutual understanding of similar experiences and backgrounds. For many, it is literally the first place to stop by as immigrants, to get accommodated into jobs and to seek advice from peers before them.  Knowing its target attendees, many Korean churches have provided various services and network to make settlement easier for its members.

Parents afraid that their children will forget their roots will put their kids in a language school, provided by the church. During entrance exams, mothers anxious about their kids’ success often come at midnight to pray for their kid’s entrance into an Ivy League school. Immigrants, seeking refuge from the foreign world will tend to re-immerse in to their home culture. Adults, driven to assimilate, will attend night school to learn English or study for the citizenship test. 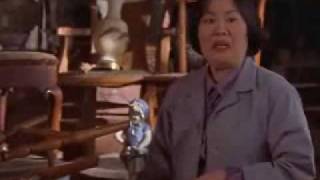 Ethnic churches have for years served as a platform to simply meet people that are like themselves that can empathize over similar immigrant struggles, share the same acquired tastes in food, and practice traditional customs. It is a community where you are able to keep your roots intact as well as progress into a better future in the new world.

Again with an unavoidable theme of identity, the common immigrant experience is a significant part of life to those that have gone through the transition into an unfamiliar world. So as the outsider looking in, the fact that these ethnic churches may come across as un-relatable is comprehensible, as many immigrants will also find nearby churches foreign. Yes, there still needs to be progress made toward the media’s portrayal of immigrants and more scenarios written about immigrant characters working toward the same goals as the US-born population but while some scenes do exaggerate, I have to admit…a few of these cultural references are right on. Is being Korean synonymous with being Christian? Probably not. But it is undeniable that there are a lot of Christians that are Koreans Americans.

Pastor Jin in Don’t Trust the B in Apt 23