TEE HEE: An Asian American Comedic Night Of Storytelling & Spoken Word For These F@#$%# UP Times 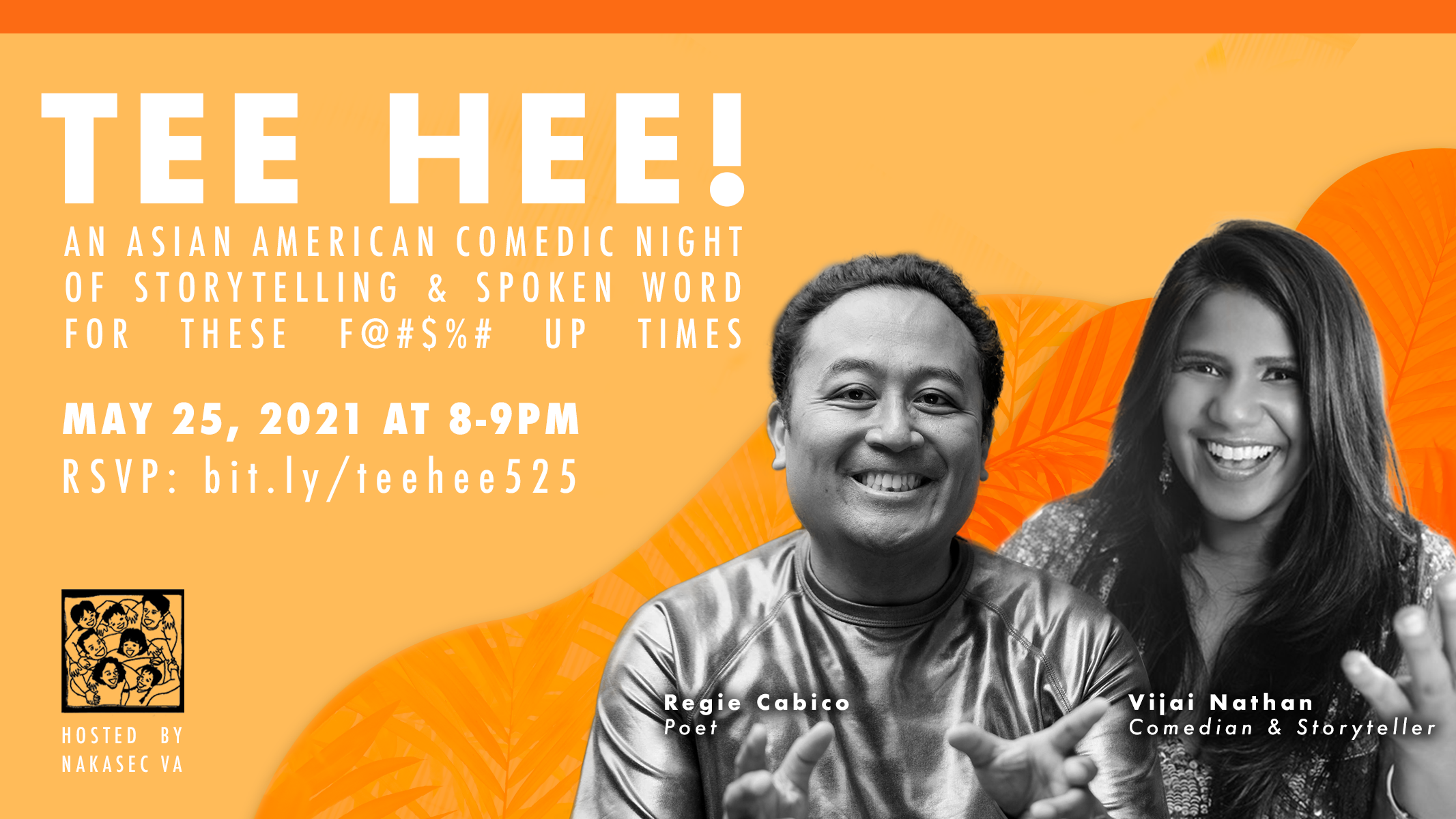 Join DMV-based Asian American comic storytellers Vijai Nathan and Regie Cabico for a FREE, adult-only comedy event! In these challenging times, the healing power of laughter is more important than ever. This is a live, virtual event hosted by NAKASEC VA.

Regie Cabico is the first Asian American and queer poet to win the Nuyorican Poets Cafe Grand Slam. He has appeared on HBO’s Def Poetry Jam, TEDx Talk and NPR’s Snap Judgement. He received a New York Innovative Theater Award for his work with the New York Neo-Futurists’ Production of Too Much Light Makes The Baby Go Blind. He produces Capturing Fire Festival and Press. He has been on faculty at Kundiman,  Banff Spoken Word Arts & NYU’s Asian Pacific Studies Artist in Residence. Cabico is a founding Board Member of Split This Rock and a 2019 Le Maison Baldwin Fellowship Recipient.

Vijai Nathan is an Indian-American comedian and storyteller making people laugh across America & internationally too! Vijai’s stories have been featured on NPR’s “Snap Judgment” And “Invisibila” Live. She’s a contributing writer for The Washington Post Magazine’s Date Lab. She has toured with her one-woman comedy shows: “Good Girls Don’t, But Indian Girls Do;” “Woman On Top,” and “McGoddess.” She’s recently debuted her new show, “I’m Not Racist, But…” in March 2021 and plans to tour with it in 2022. She has performed throughout the U.S. and was featured at festivals in Montreal, Singapore, South Africa, London, and Trinidad. She has the honor of being one of the few South Asian artists to be invited to perform at the Kennedy Center, Smithsonian, Library of Congress & Constitution Hall in Washington D.C. Vijai’s humor springs from her experiences of growing up as a “foreigner” in America- despite the fact she was born and raised in a suburb of Washington D.C. She lovingly and hilariously talks about growing up as an Indian in America, dating, cultural clashes with her parents, and the racism she dealt with as a child and now as a comedian. You can catch her on an episode of Netflix’s “Lady Dynamite, ” starring comedy legend Maria Bamford, and in the film “Meet the Patels, ” an Oprah Magazine pick that Variety calls “Sharp” & “Riotously Funny.”