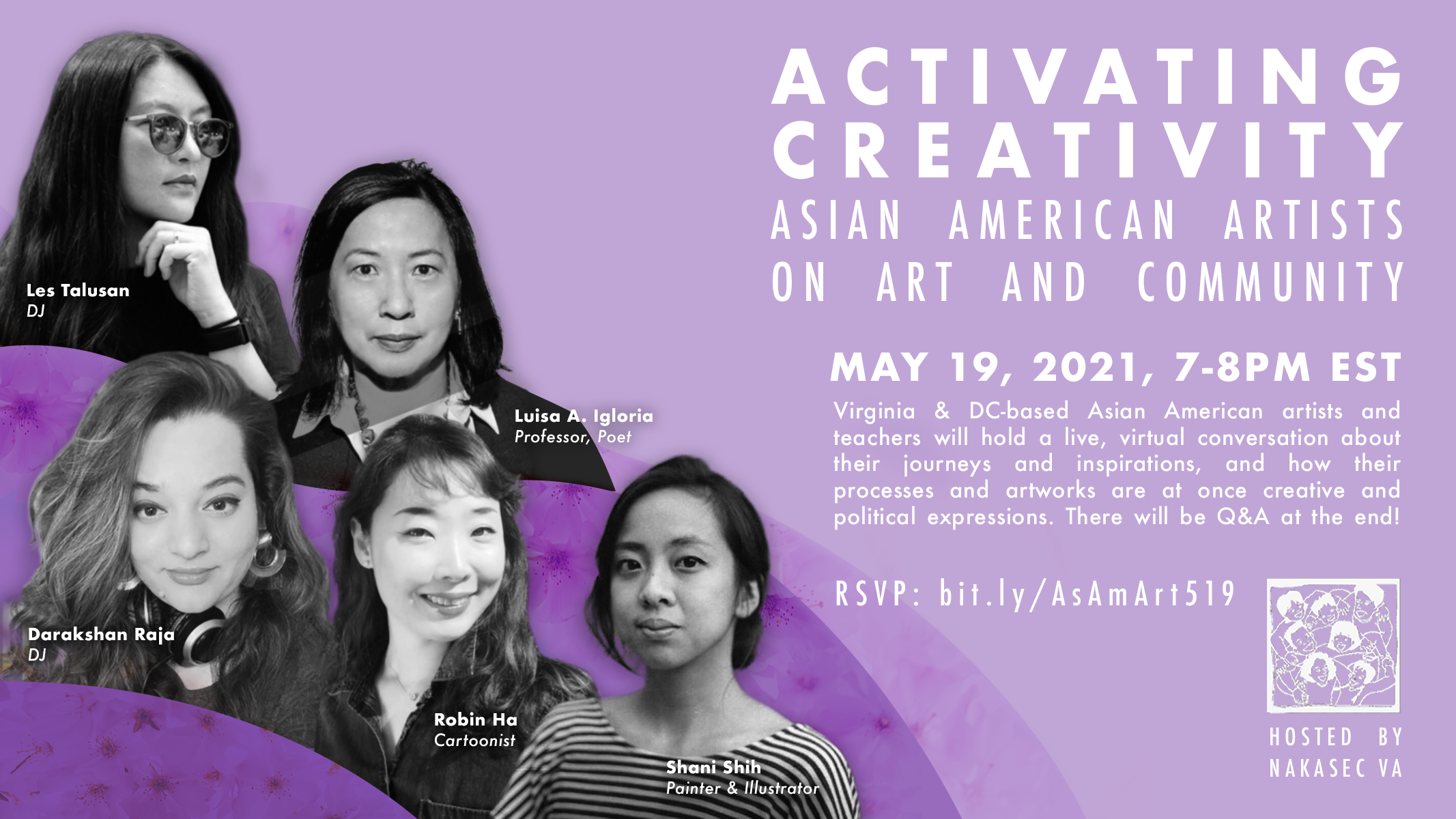 Virginia & DC-based Asian American artists and teachers – Darakshan Raja (DJ), Les Talusan (DJ, photographer, curator), Luisa A. Igloria (professor, poet), Robin Ha (cartoonist), and Shani Shih (painter, illustrator) – will hold a live, virtual conversation about their journeys and inspirations, and how their processes and artworks are at once creative and political expressions. Hosted by NAKASEC VA. There will be Q&A at the end!

Robin Ha (she/her) is a Korean American cartoonist based in Washington DC. She is the author and the illustrator of Almost American Girl, a 2021 Walter Award honoree memoir, and Cook Korean!: A Comic Book With Recipes, a New York Times bestselling cookbook graphic novel. Robin grew up in Seoul, South Korea, and moved to the United States at age fourteen. After graduating from the Rhode Island School of Design, she moved to New York City and worked in the fashion industry for several years before diving into comics. Her work has been published in independent comics anthologies as well as in the pages of Marvel Comics and Heavy Metal Magazine. Robin has been an avid reader of comics since she was introduced to them by her mother as a young girl. She strives to make comics that are entertaining and also empowering the readers to become more accepting of themselves and others. Robin is currently working on her third graphic novel inspired by the Korean folklore of Gumiho.
@RobinHaART

Shani Shih is a multidisciplinary visual artist, teaching artist and organizer based in Washington DC. She works primarily in painting, illustration, and public art, and draws heavy influence from hip-hop and graffiti. With compositions featuring expressive figures intertwined with themes of nature and industrialism, her work speaks to visceral emotional and bodily experience, the complexity of our inner worlds, and the brutal social systems that so powerfully shape our lives. In 2016, Shani co-founded the 411 Collective, a hip-hop/graffiti collective that supports community empowerment and movement work through murals and direct art action. In 2018 she founded Chinatown Art Studio, a summer art program servicing Asian Pacific American youth. She has worked as a tenant organizer since 2017, and as such continues to learn and grow at the intersections of art, community, and anti-displacement work in Chinatown and across Washington, DC.
@shanishih

Les Talusan is a DJ, photographer, curator, teaching artist and organizer whose practice immerses people in the joy of discovery, empowerment, and community.  This approach is informed by Les’ own story of resilience, liberation and courage as an immigrant, mother and v/s. She DJs on Twitch @lestalusan.
@lestalusan | SAMASAMA Art: @samasamart

Luisa A. Igloria is the author of Maps for Migrants and Ghosts (Southern Illinois University Press, 2020), The Buddha Wonders if She is Having a Mid-Life Crisis (Phoenicia Publishing, Montreal, 2018), and 12 other books. Luisa was the inaugural recipient of the 2015 Resurgence Poetry Prize (UK) for ecopoetry, and is a Louis I. Jaffe Professor of English and Creative Writing in the MFA Program at Old Dominion University. She also leads workshops for The Muse Writers Center in Norfolk. In July 2020, she was appointed Poet Laureate of the Commonwealth of Virginia.
@ThePoetsLizard

DJ Kiran works to cultivate joy and community in movement work through playing music with a focus on playing Bhangra and Urban Desi Music. Music is a form of cultural expression and for many in the diaspora, it is the only space where multiple identities can be bridged together and you can feel at home. DJ Kiran picked up DJing after following in the footsteps of other Desi women DJs and a way to complement her organizing work. DJ Kiran was part of The Empowerment Album, a collaboration between Desi women DJs from the US, UK, and Canada. You can follow her on Instagram @DRaja to keep up with her DJing or follow her on Soundcloud at DJ Kiran (Darakshan Raja) to hear her mixes.