Chicago, IL – Today, on Day One of a new administration, the President Joe Biden released a bill that will provide an eight-year pathway to citizenship for 11 million undocumented immigrants. He also released a series of executive orders to pause deportations, repeal the Muslim Ban, reinstate the Deferred Action for Childhood Arrivals (DACA) Program, and halt border wall construction.

Jung Woo Kim, Organizing Director of NAKASEC, said, “This is the most positive and far reaching legislation on immigration to be introduced on Day One of any administration. The bill and the executive orders are the fruit of years of our immigrant community organizing, building public support for Citizenship For All and undocumented community members like myself, and turning out the increasingly powerful Asian American vote.”

“When we talked with Asian American voters in Pennsylvania, 80% of them stated they support a pathway to citizenship for all undcumented immigrants. This bill is an acknowledgement that our community’s voice is being heard,” remarked Mel Lee, executive director of Woori Center.

“While the bill and the executive orders are a critical first step, the work is far from over,” explains Glo Choi, Community Organizer with HANA Center. “Congress must now act and pass this legislation to ensure my family and I, and all immigrant families, can adjust their status. And when we say ‘citizenship for all, we’re talking about a shared humanity and belief that people belong in the place they call home, not preferential treatment based on employment skills or academic exceptionalism. The Biden administration must work with Congressional leaders to make sure it happens.”

NAKASEC VA leader, Amy Lee from Centreville, Virginia, highlighted the importance of a pathway to citizenship by saying, “As a single mom with no spousal support, I’ve struggled to pay the bills on my own for the past five years. To pay for rent, food, my children’s tuition and car insurance, I work until midnight, six to seven days a week. I am exhausted. We want to go to the hospital when we feel sick, we want to receive the same stimulus checks as everyone else, and we no longer want to feel afraid for our safety here. This is our home and I plead for the new Biden administration to help our family spend the rest of our lives here.”

Bati Tsogtsaikhan, NAKASEC VA volunteer and NAKASEC board member, added “It is because of our community and partners that we have the opportunity we have now, an opportunity we have not had since 2008. We must work together and stay united to bring the bill over the finish line this year so our community members have the relief they need and deserve.”

“In the months going forward, we must organize to ensure that this bill moves in its entirety through the House and Senate and is signed into law,” stated T.C. Kim, executive director of the Korean Resource Center. “We must stay vigilant so that our most vulnerable of our communities are not put on the chopping block as the bill enters congressional negotiations.”

In commenting on one of the key executive orders, John Park, executive director of Minkwon Center for Community Action said, “Although we very much welcome the immediate first steps including pausing deportations, we urge the new Biden-Harris administration and the 117th Congress to codify legislation that would not only permanently ban deportations and detentions, but instead keep families together and create a pathway to citizenship for all.”

NAKASEC, NAKASEC VA, HANA Center, Woori Center, Minkwon Center for Community Action, and Korean Resource Center invite community members to join our 100 Day Campaign for Citizenship For All. We all deserve safety, security, health, and to be with our family and loved ones! 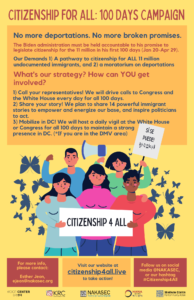