RELEASE: #Journey2Justice Dream Riders and Allies Call on Mimi Walters to be a Leader for Undocumented Youth 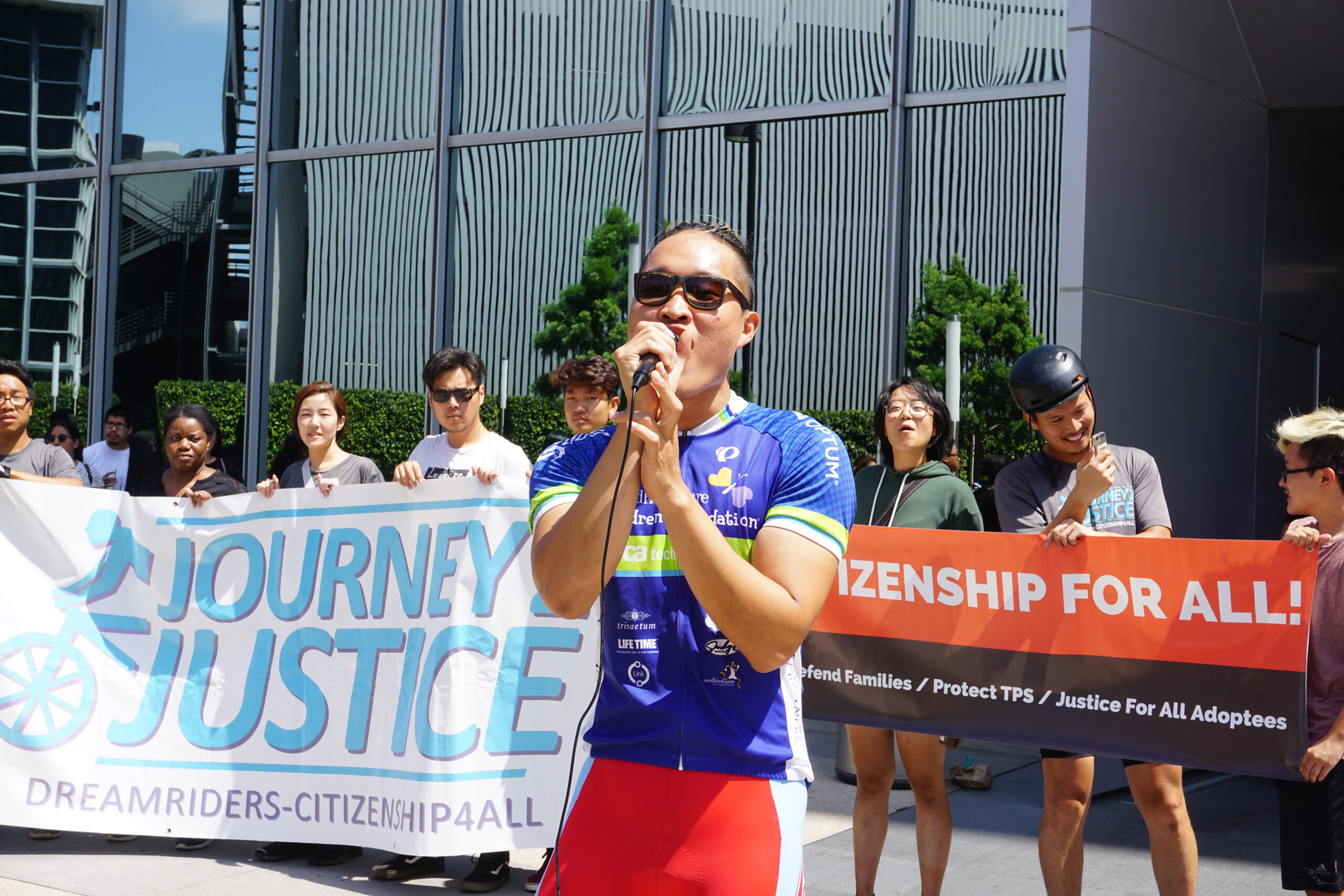 IRVINE, CA – On Labor Day, the Journey to Justice “Dream Riders” from NAKASEC & Affiliates, Korean Resource Center (KRC) of Southern California, HANA Center of Greater Chicago, and NAKASEC VA, led a delegation ton Congresswoman Mimi Walters in her home district in Orange County after biking 1,500 miles from Seattle, Washington, where they started the border to border bike tour. The rally took place to speak out against Congresswoman Walters inaction on providing a permanent solution for undocumented young people despite her district’s impacted communities and their multiple attempts to deliver their message to her. The “Dream Riders” and community leaders from Resilience OC, VietRISE, and Orange County Voter Information Project (OCVIP), and others demanded that nearly one year after Deferred Action for Childhood Arrivals (DACA) was announced to be cancelled by the White House, Congresswoman Walters play a leadership role in Congress to provide a permanent solution for all young immigrants without compromise to their families or communities. Moreover, they called on Congresswoman Walters to advocate for #Citizenship4All 11 million undocumented immigrants and 35,000 inter-country adoptees.

Bo Thai, Dream Rider from LA and volunteer with Korean Resource Center (KRC), shared: “Congresswoman Mimi Walters refuses to meet with and listen to immigrant communities even though these folks make up a large part of her constituency. Her job is to serve the people she represents which includes undocumented immigrants. We are not asking for the world. We just want to be heard. We demand a meeting with Mimi Walters, we demand that she hear our stories, and we call on her to support a solution that includes ALL undocumented immigrants. Citizenship for ALL!”

Lena Tran, Youth Organizer with VietRISE, expressed: “Orange County as a whole is one of the most impacted communities around immigration, where more than 10 percent are undocumented. Many of our community members have to live in fear of deportation, if not for themselves, then for their loved ones. As a community of immigrants, we in Orange County can not and should not turn our back on our neighbors. We deserve better and we demand that Mimi Walters pass a pathway to citizenship for all immigrants and refugees now – so that our community members can live safely and thrive together!”

Following the event, the Dream Riders departed Irvine to head towards San Diego, the final destination of the Journey to Justice. On September 5th, the one year anniversary of President Trump rescinding the Deferred Action for Childhood Arrivals (DACA) program, our young riders will be in San Diego for a finale rally with community based organizations in the area. Read more here.

NAKASEC & Affiliates’ “Journey to Justice” is a 37 day, border to border bike tour that started on August 1, 2018 in Seattle and will end on September 5, 2018 in San Diego, the one-year anniversary of the cancellation of the Deferred Action for Childhood Arrivals (DACA) program. This bike tour was spearheaded by young undocumented leaders and allies and actively works to raise awareness on the need for citizenship for all, register voters, and build solidarity through story sharing and one on one conversations with local community members along the route. You can learn more about the Journey to Justice campaign for citizenship for all by visiting http://godreamriders.org.