ICYMI (Value Our Families Coalition): Washington Post – How Trump is Changing the Face of Legal Immigration 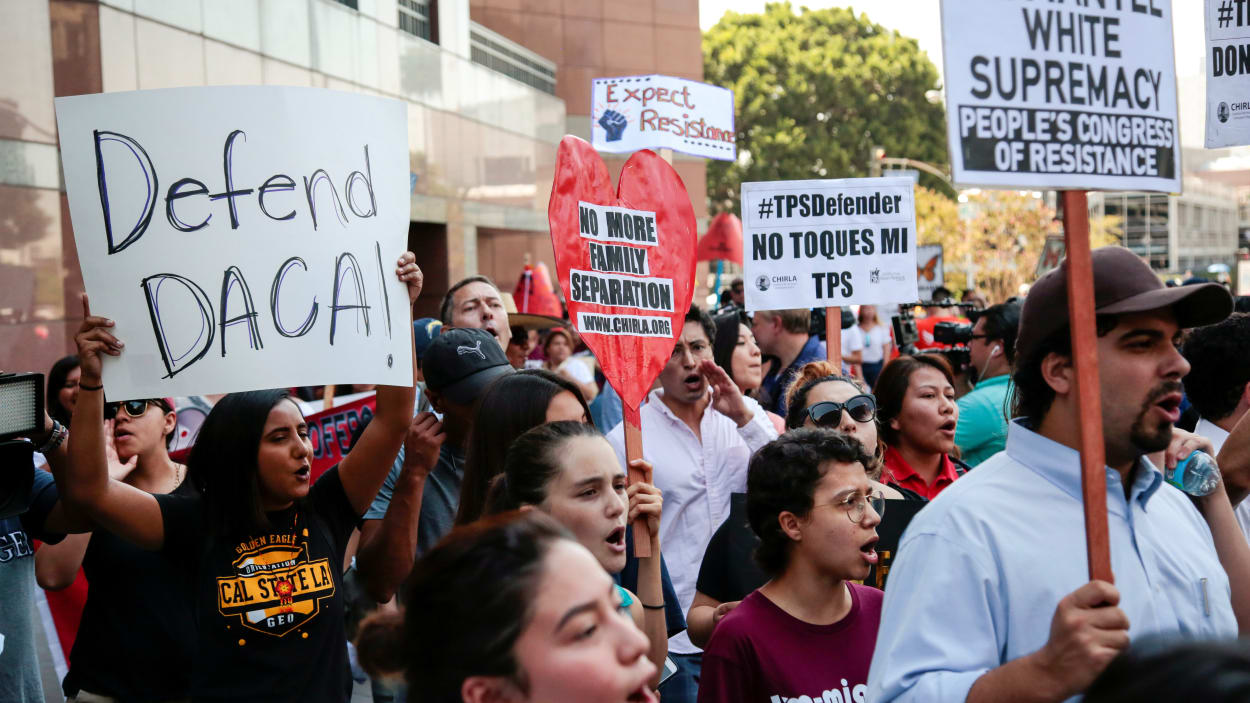 From the Value Our Families coalition:

“Donald Trump will do whatever it takes to move forward his anti-immigrant, anti-family agenda and slash immigration in this country, even if it tanks the U.S. economy.

“With or without Congress, the Trump administration is already blocking tens of thousands of families from being reunited by downsizing family-based immigration, slow-walking applicants in the Diversity Visa program, and slamming the doors on refugees and those seeking asylum. He’s not going to stop until he reaches his end-goal of cutting legal immigration by 50 percent.”

The number of people receiving visas to move permanently to the United States is on pace to drop 12 percent in President Trump’s first two years in office, according to a Washington Post analysis of State Department data.

Among the most affected are the Muslim-majority countries on the president’s travel ban list — Yemen, Syria, Iran, Libya and Somalia — where the number of new arrivals to the United States is heading toward an 81 percent drop by Sept. 30, the end of the second fiscal year under Trump.

Last week, the Supreme Court upheld that ban, paving the way for an even more dramatic decline in arrivals from those countries.

Legal immigration from all Muslim-majority countries is on track to fall by nearly a third.

The Trump administration has argued that its immigration policies are driven by national security concerns and an effort to preserve jobs for Americans.

“The history of immigration policy in the United States is one of ebbs and flows,” said a White House official, who spoke on the condition of anonymity. “Yet in recent years, the U.S. has [had] record immigration without any consideration of this influx’s impact on American workers or wages.”

Some public officials and immigration experts have raised concerns that the administration’s approach targets certain nationalities, discriminating against those from poorer and nonwhite countries.

The Post’s analysis also found immigration declines among nationalities not targeted by Trump’s travel ban, including nearly all of the countries that typically receive the largest number of immigrant visas from the United States. The number of immigrant visas granted to people from Mexico, the Dominican Republic, the Philippines, China, India, Vietnam, Haiti, Bangladesh, Jamaica, Pakistan and Afghanistan has also declined. Among the 10 countries that send the highest number of immigrants to the United States annually, only El Salvador is projected to receive more visas under Trump: an increase of 17 percent in his first two fiscal years.

The number of immigrant visas approved for Africans is on pace to fall 15 percent.

Meanwhile, the flow of legal immigrants from Europe has increased slightly, though the total number of visas is still much smaller than that from Africa, Asia and Latin America.

It is unclear whether part of the drop in immigrant visas reflects declining interest in immigrating to the United States, because the State Department did not release visa application data, saying it doesn’t publish that information.

The number of people apprehended trying to cross the border illegally from Mexico declined precipitously during Trump’s first fiscal year. While outside experts suspect Trump’s anti-Muslim and anti-immigrant rhetoric has deterred some legal immigration, too, they cautioned that visa backlogs and processing times are so extensive that even a significant drop in applicants is unlikely to put a major dent in the same year’s immigrant visa issuances.

The shift in legal immigration is a reversal of the trend under President Barack Obama. During Obama’s time in office, immigrant visas increased by 33 percent, surging to 617,752 in fiscal 2016, the highest level in decades.

That surge occurred almost entirely in the last two years of Obama’s presidency. Despite declines since then, the Trump administration still will be providing more immigrant visas than Obama did in earlier years of his presidency.

During the 2016 presidential campaign, Trump repeatedly criticized the rate of immigration under Obama as dangerous and unchecked. He called for “a total and complete shutdown of Muslims entering the United States.” He has vowed to bring about “extreme vetting” and to keep out those who don’t share “our values.”

His stance on immigration fueled his rise to the White House; 64 percent of voters who identified immigration as the most important issue facing the country voted for Trump, according to exit polls.

Trump has said he wants additional limits on immigration in part because he believes new arrivals create undue competition for American workers.

But some of Trump’s critics have alleged that his administration is seeking to slow the transition to a majority-minority U.S. population, citing his disparaging remarks about Muslims and his characterization earlier this year of Haiti, El Salvador and African nations as “shithole countries.”

Trump’s economic argument against immigration comes as the unemployment rate has fallen to 3.8 percent, the lowest level in nearly two decades. Some American businesses are clamoring for workers, and the slowing of legal immigration could further strain a job market in which a record 6.6 million positions are unfilled.

The Post’s analysis focuses solely on immigration visas that allow people abroad to move permanently to the United States with the intention of obtaining citizenship — in other words, the visas that more closely anticipate long-term demographic shifts in the American population. The analysis does not include temporary visas, such as the popular H-1B visas for skilled workers, the H-2B visas for seasonal workers or student visas.

Federal data shows that applications for the H-1B visas have fallen for the first time in five years, according to a March report by immigration lawyers. The report cited a barrage of new and unprecedented application requirements, as well as reports of administration plans to further limit the visas.

With certain industries facing worker shortages, some economists argue that new limits on immigration could have unintended consequences for the nation’s economy.

“In general, the consensus of economists is that immigration on average has a strong positive effect on the American economy,” said Giovanni Peri, the chair of the economics department at the University of California at Davis. “The big picture really is that this cut in the number of all immigrants — high- and low-skill — is going to have an impact by slowing the economy.”

Legal immigration is believed to outpace illegal immigration by about 3 to 1, according to statistics collected by the Pew Research Center, and scaling back legal arrivals has been a top priority of Attorney General Jeff Sessions, White House adviser Stephen Miller and some other administration officials.

But the Trump administration has managed to affect significant changes in immigration without Congress, in part by relying on administrative guidance handed down to consular officials to change the way immigrant visas are considered and processed, administration officials and outside experts said. The result is a shift in the legal immigration process in line with the vision of Miller , the adviser who officials say sits at the helm of immigration policy decisions.

“Miller sees consular officers as the tip of the spear in his effort to control who is getting into the country,” said one high-ranking national security official who spoke on the condition of anonymity because the official is not authorized to speak to the media. “He sees it as a generational thing, like he has to retrain them.”

Under the previous administration, case officers at U.S. Citizenship and Immigration Services (USCIS) processed immigrant visa applications with “a culture of getting to ‘yes,’ ” said another high-ranking administration official familiar with immigration policy deliberations.

Now those officers, along with consular officers at the State Department, feel empowered to exercise their own discretion, take more time scrutinizing each applicant and more strictly enforce existing laws on inadmissibility, the official said.

In a March report, analysts at the Migration Policy Institute, a liberal think tank, noted that these bureaucratic changes have “gone largely unnoticed.”

“Without need for congressional approval, the administration has initiated several small but well-calibrated actions through regulations, administrative guidelines, and immigration application processing changes,” the report stated.

Amendments to the State Department’s Foreign Affairs Manual in January expanded the burden of proof for visa applicants to show that they will not become “a public charge,” which is grounds for denial. Immigration analysts who have reviewed leaked policy drafts expect the administration to publish new rules soon to expand further the terms of inadmissibility.

“It’s intended to have an effect on the numbers,” said Doris Meissner, a former commissioner of the U.S. Immigration and Naturalization Service and now a senior fellow at the Migration Policy Institute. “It’s intended to put more rigor into the visa issuance process. But almost by definition, that’s going to likely result in more denials.”

The largest decline in approvals is occurring in the family-based visas that allow U.S. citizens and legal residents to sponsor the immigration of relatives to the United States — what Trump has labeled “chain migration.” Special immigrant visas that are predominantly reserved for the Iraqis and Afghans who served the U.S. government in war zones also have been reduced significantly.

Margaret Wong, an Ohio-based immigration attorney with offices across the country, said her practice has experienced an increase in family-based immigrant visa applications since Trump took office. More people are applying out of fear that the administration will soon eliminate those types of visas, she said.

But immigration attorneys are having less success getting the applications approved.

Applicants are “facing arbitrary questions that are really difficult for them to answer, and then they’re getting denials for things that attorneys have never seen before,” said Kristie De Peña, director of immigration and senior counsel at the Niskanen Center, an immigrant advocacy group. “We’re hearing that pretty much across the board from all the attorneys that practice with us.”

There have been similar trends in other immigrant categories. Refugee arrivals are on track to fall by 75 percent from 2016 levels, according to federal data.

With just three months before the end of the fiscal year, the United States is only a third of the way to its refu­gee cap for Africa and Latin America and less than half of the way to its cap for Asia. But it has surpassed the smaller cap set for European refugees, said analysts at the Niskanen Center.

Trump has consistently emphasized his intention to transform the U.S. immigration system into one based on “merit” rather than family ties, preferring those with desired skills and financial resources who also speak English.

In his State of the Union address, Trump said he planned to accomplish this in part by eliminating a vast subset of family-based visas, along with the diversity visa lottery, which provides about 50,000 immigrant visas to underrepresented nationalities each year.

Asked whether any of the specific regional or country declines in immigrant visa numbers are intentional, one of the high-ranking administration officials said that the government’s system for administering visas is “thoroughly egalitarian.”

“No one in our government is making any judgment based upon anybody’s national characteristics — there’s no form of discrimination tolerated,” the official said. “What we are talking about is objectively applying the laws of the United States and making thoroughly objective national security determinations based on real-world facts, and nothing else.”