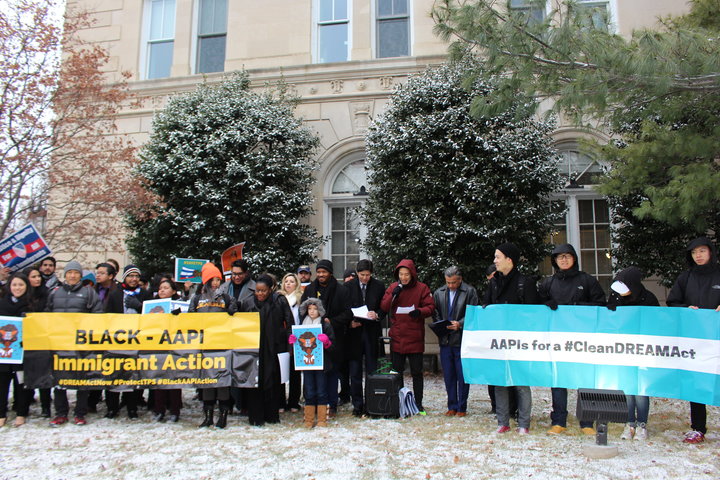 “The time to past the clean DREAM Act is now! Not tomorrow, not next week, not next month, but now. Each day that Congress does not act means another 122 undocumented young people are added to the list of thousands who already at risk for deportation. A vote for a CR without the clean DREAM Act is a vote to deport our young people. Congress must act now!” stated Jungwoo Kim, a directly impacted community organizer with the Korean Resource Center (KRC) and NAKASEC.

“Let’s be very clear, Dreamers are Americans, they’re our entrepreneurs, they’re our college students, and we are not going to allow an electoral operation reverse generations of progress and diversity. [The lives of Dreamers] should not be dangled for the political gamesmanship [of those in Congress]. We will do our job at the federal and state level to find a permanent solution for each and every Dreamer!” exclaimed Kevin de Leon California State President Pro Tempore.

“We are fighting hard for something that we are going to win, and the reason we’re going to win [the clean DREAM Act] is because of Dreamers. Dreamers are out in the street, telling their stories every single day, and making Americans understand that [they] are, in fact, part of our country and are here to stay, not to be used as a political football… Also, we are not going to substitute one family’s pain for another family’s gain. We are not making those kinds of compromises. We are not going to touch the family immigration system, and we are not going to touch the diversity visa program!” remarked CAPAC Immigration Subcommittee Chair Congresswoman Pramila Jayapal (WA) on the recent negotiations to remove family based immigration and the diversity visa program in comprehensive immigration reform.

“As a member of UndocuBlack Network, we understand the importance of standing up for what is right, and I am here to fight against what was said regarding my home country of Haiti. I represent the Haitian community, I represent the American community, and I represent the bridge between the two. We are here to stand on behalf of those who cannot stand for themselves and to demand that Congress pass the clean DREAM Act that includes protections for TPS holders! Elected officials must put politics aside and look at the people affected by their political games. This is not a game, these are our lives!” proclaimed Guerline Jozef, President of the Haitian Bridge Alliance and member of UBN.

In light of recent negotiations surrounding the Deferred Action for Childhood Arrivals (DACA) Program and President Trump’s blatantly racist statement against TPS recipient countries, we are standing strong together to denounce racism and racist policies. We demand that the United States government protect ALL American people. Congress needs to act to show it upholds the American values of family and diversity, and rejects trading hateful and racist policies for our young people’s futures.