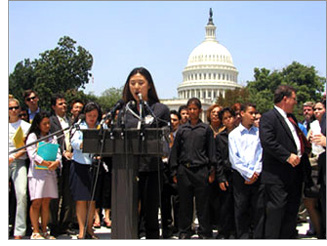 RICHMOND (July 21, 2017) – Attorney General Mark Herring today joined 19 fellow state attorneys general in urging President Trump to maintain and defend the Deferred Action for Childhood Arrivals (DACA) program. In the letter, the attorneys general explain how DACA has benefited their states and the nation as a whole and call on Trump to fulfill his public commitment to Dreamers.

“DREAMers are invaluable members of our communities, our institutions of higher education, and our economies in Virginia and across the country. In most cases they were raised here, they attended Virginia schools, and they have known no home but Virginia. I hope President Trump will see that as well and defend the DACA program,” said Attorney General Herring. “DACA gives these talented young men and women the opportunity to pursue their dreams, and our Commonwealth benefits from their successes. I am proud to stand with my fellow state attorneys general and will do everything in my power to defend DACA and fight for our DREAMers.”

Since DACA’s inception five years ago, nearly 800,000 young immigrants who were brought to this country as children have been granted DACA status after paying application fees, submitting to and passing background checks and applying for work permits. At the end of 2016, nearly 20,000 young people in Virginia have had their applications for DACA approved.

Since 2014, when Attorney General Herring advised that those protected under the DACA program qualify for in-state tuition at Virginia colleges and universities, more than 1,200 DREAMers have enrolled at institutes of higher education in the Commonwealth.

“Mr. President, now is the time to affirm the commitment you made, both to the ‘incredible kids’ who benefit from DACA and to their families and communities, to handle this issue ‘with heart.’ You said Dreamers should ‘rest easy.’ We urge you to affirm America’s values and tradition as a nation of immigrants and make clear that you will not only continue DACA, but that you will defend it,” wrote the attorneys general. “The cost of not doing so would be too high for America, the economy, and for these young people. For these reasons, we urge you to maintain and defend DACA, and we stand in support of the effort to defend DACA by all appropriate means.”

The letter refutes arguments set forth by those opposing DACA and threatening litigation, saying they are “wrong as a matter of law and policy,” and urges the President not to “capitulate” to their demands.

“NAKASEC applauds Attorney General Herring for this support for DACA. It’s the right thing to do,” said Sookyung Oh, D.C. Area Director for NAKASEC.“Thousands of young people in Virginia, including many Korean and Asian American youth, are currently pursuing their hopes and American dreams, freed from constant fear of getting torn from their families by ICE, thanks to DACA protection. The decision to keep in place programs like DACA and Temporary Protected Status is smart policy that’s consistent with the best of America’s values. NAKASEC will continue to work with our communities to pursue a permanent and broader solution for all.”

“All Virginians should have the opportunity to pursue their dreams without living in fear of having everything taken from them.  Our community enthusiastically commends Attorney General Herring’s continued support for DACA protections,” said J. Walter Tejada, President of the Virginia Latino Leaders Council. “The Commonwealth needs bright, talented young men and women like our DREAMers if we want to remain a leader in the 21st century economy.”

“DACA has made a significant difference in the lives of exceptional young people; it has given them access to higher education, work and hope,” said Dr. Emma Violand-Sanchez, founder and chair of the Dream Project. “To be protected of deportation gives them peace of mind. On behalf of thousands of immigrants, I thank Attorney General Herring.”

“Mason DREAMers commends Attorney General Mark Herring, and other attorneys general across the country, for taking a bold stance in support of the Deferred Action for Childhood Arrivals (DACA) program,” said Rodrigo Velsaquez, a Mason DREAMers Advisory Board member. “Working with students across the state, Mason DREAMers has seen the impact DACA has had on thousands of families. Thanks to DACA, and the actions by Attorney General Herring, students have been able to access in-state tuition rates at public higher education institutions to continue their dreams and the dreams of their families. Not only has DACA increased access to higher education, but has also allowed recipients to apply for drivers licenses, jobs, and not live in constant fear of deportation. Protecting DACA is good common sense policy that should be preserved and expanded. Mason DREAMers is committed to continued advocacy to ensure everyone in our undocumented community is protected and has access to higher education, regardless of immigration status.”

“DACA protections assist in the development of a talented workforce and community, which are essential in ensuring the future economic vitality of Virginia,” said Michel Zajur, President and CEO of the Virginia Hispanic Chamber of Commerce. “That’s why it is important for Virginia that DACA protections remain in place.”