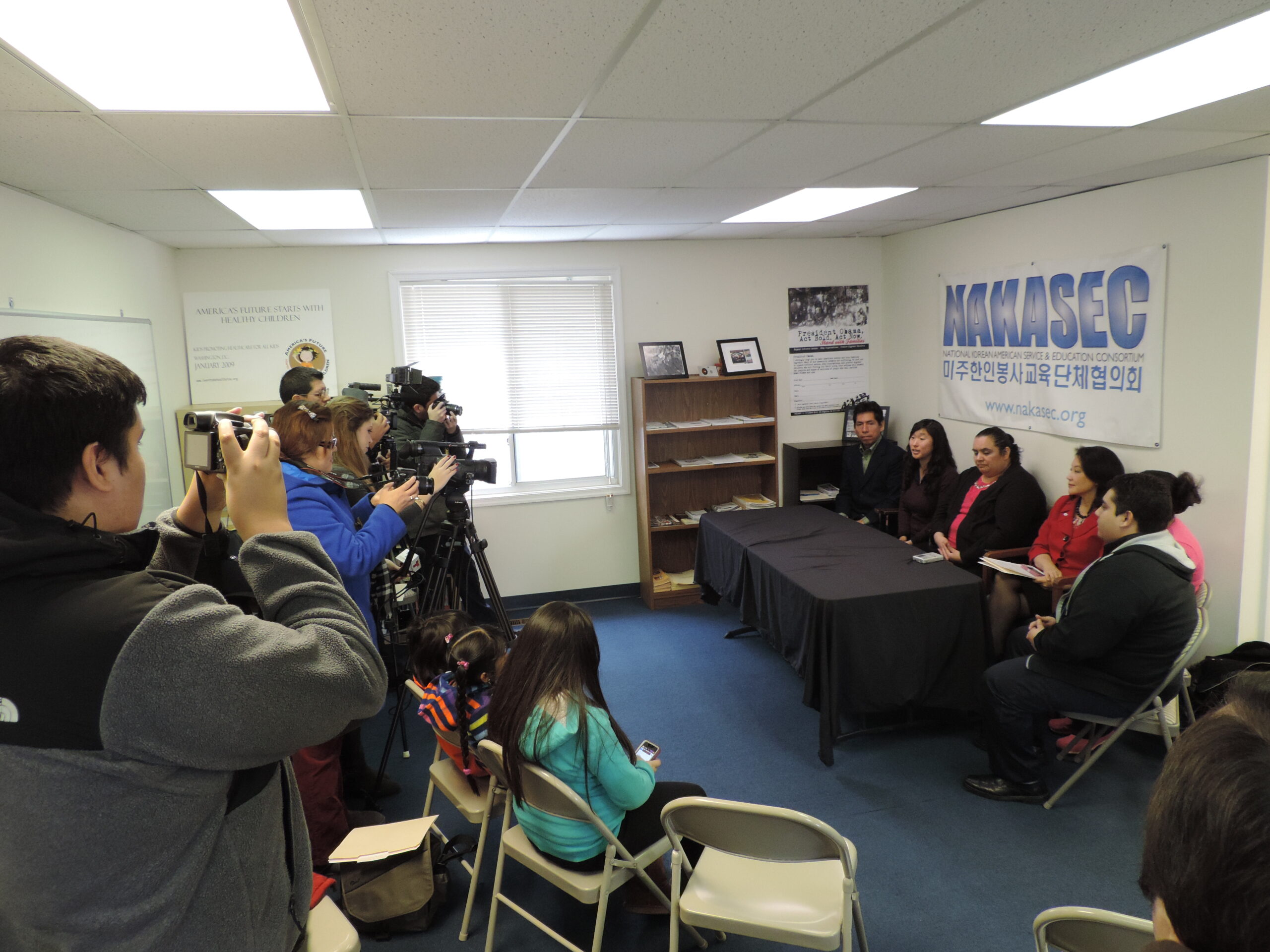 ANNANDALE, VIRGINIA— Today, the National Korean American Service and Education Consortium (NAKASEC) hosted a press conference with Edgar Aranda-Yanoc, Chair of the Virginia Coalition of Latino Organizations (VACOLAO); Lenka Mendoza, General Coordinator of Dreamers Moms USA; Aracely Lopez from Dreamer Moms; Jose Caceres, leader with Dreamers of Virginia; and Grace Han Wolf, Herndon Town Hall Council Member, to assure the immigrant community in Virginia and nationwide that they are committed to helping community members prepare for the Deferred Action for Childhood Arrivals (DACA) and Deferred Action for Parents of Americans and Lawful Permanent Residents (DAPA) programs and emphasize that the Texas court decision is simply a temporary political setback to the immense win for our immigrant families.

Grace Han Wolf, Herndon Town Hall Council Member, said: “As a strong advocate of working for the common good of our community, I encourage Korean Americans who are potentially eligible for the expanded DACA and new DAPA programs to continue to prepare to apply. Our community deserves this win. Our young people deserve a chance to work legally to support their families and have an affordable education to better their future. This is only a bump in the road and not the end. Let’s be proactive and make sure that our community voice is heard by preparing to apply for expanded DACA.”

Lenka Mendoza, General Coordinator of Dreamers Moms USA, said: “I was very angry about the injunction ruling. How much longer does my family have to wait? The anti-immigrant elected officials do not want to solve anything and now they are holding our communities back from achieving our dreams. But we are not going to give up. We are going to continue to fight and we will win.”

Dae Joong (DJ) Yoon, executive director of NAKASEC said: “A minor setback will not deter us from helping community members prepare for expanded DACA and DAPA. Since November 2014, our centers in Los Angeles, Chicago, and Annandale have been receiving 15-20 calls a day from immigrant youth and parents about expanded DACA and DAPA and the expected date, February 18, that USCIS would begin accepting applications for expanded DACA. Now we have to cancel all the appointments and respond to the extreme disappointment from community members impacted by this mean-spirited court case decision. Nothing can stop DACA and DAPA because these programs are about the dreams of millions of hardworking families who want nothing more than to live with their loved ones in this land they call home. NAKASEC, KRC, and KRCC will continue to protect and fight for DACA and DAPA.”

The Administration is looking at the range of options and seeking review with the Fifth Circuit Court of Appeals. The Department of Justice (DOJ) will appeal the temporary injunction in the Fifth Court Ruling, which could take four to eight months. This wait period is too exhaustive for our immigrant community, so activists are urging the Administration to do everything in its power to expedite the appeals process. For instance, DOJ may plan to request an emergency safe, which would allow expanded DACA, and later DAPA, to go forward pending the appeal to the Fifth Circuit of Appeals.

In January, 26 states filed a lawsuit against the President’s executive actions on immigration. The first court case was held in Brownsville, Texas. On February 16, the U.S. District Court Judge Hanen, who has previously expressed anti-immigrant views, issued a preliminary injunction that temporarily blocks the implementation process of the expanded Deferred Action for Childhood Arrivals (DACA) and new Deferred Action for Parents of Americans and Lawful Permanent Residents (DAPA) programs that President Obama announced in November 2014. The expanded DACA program was slated to begin accepting applications on February 18, 2015, but the judge’s decision pushes back the start date for millions of young immigrants and parents, including nearly 48,600 newly eligible individuals from the Korean American community, to come forward, apply, and live without fear. Until further notice, the Department of Homeland Security (DHS) will also suspend the plan to accept requests for DAPA.

The decision does not affect the original DACA program that was announced in 2012 or other parts of the President’s announcement on executive action on immigration in November 2014. It does not affect DHS’s ability to set and implement enforcement priorities. The priorities established in the November 20, 2014 memorandum entitled “Policies for the Apprehension, Detention and Removal of Undocumented Immigrants” remain in full force and effect. Those who qualify for the expanded DACA and DAPA will not be a priority.

The Department of Justice, along with more than 230 legal scholars and public officials, including 100 constitutional legal scholars, dozens of mayors of our nation’s largest cities, 13 state attorney generals, and a coalition of law enforcement professionals have all publicly stated that the President’s executive actions on immigration not only benefit the economy, are legally sound, and promote law enforcement, but they are also the right thing to do for all communities across the nation.

For more information or to receive updates on administrative relief, please visit the NAKASEC website.