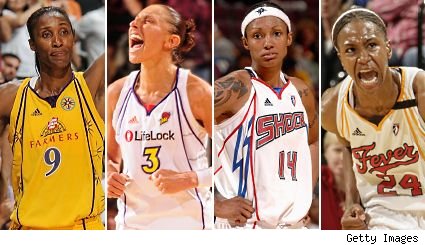 Can you name these WNBA players?

Let me just start by saying that I hate the current NBA lockout. Hate it with a fiery passion. No NBA basketball until most likely next January? Possibly even canceling the entire 2011-2012 season? I may as well just die.

Melodrama aside, for those of you that know me, you are well aware of my bordering-on-obsessive love of the NBA. But as of July 1st, 2011, with the collective bargaining agreement expiring and the NBA literally ‘locking-out’ its players, my love has gone unrequited. Thus, I’ve had to get my basketball fixes elsewhere.

So you can imagine my glee when Colorlines released their 2011 Summer Movie Guide last month and on it included a documentary called, “The No Look Pass,” about a Burmese American queer female basketball player and the journey she goes on navigating her family responsibilities, sexuality, ethnic identity and a myriad of other issues. So many of my favorite things in one film! It has yet to make its way around the country so, unfortunately, I have yet to see it but it got me thinking more about an issue that’s been on my mind for a while now: women’s basketball. Most people, basketball fan or not, are at least vaguely aware of the fact that women’s basketball is not as popular as men’s.

But why is that?

I will be the first to admit that I don’t watch a ton of women’s basketball, if much at all. On the rare occurrences that I’ve caught a game on television or gone to a live event, I’ve always lost interest fairly quickly but I can’t figure out why. It kind of bugs me.

What is it about women’s basketball that just doesn’t seem to me as engaging as men’s?

This is a question I’m still investigating and don’t have any clear-cut answers to but here are some of my general observations from what I’ve witnessed thus far:

A part of me also thinks that, and I hate to admit this, that I think this way because I’ve been socialized for so long to believe that women just aren’t as good as men are at the traditionally ‘masculine’ sports like football, baseball, etc. That men are supposed to be better at the sports that require one to be big and strong while women are supposed to be better at sports that require them to be lean and agile, i.e., why isn’t there a women’s football league? So maybe I’m subconsciously projecting these thoughts onto the game when I watch women’s basketball. And while women’s basketball is gaining more popularity, I can’t help but think that much of society feels similarly to how I do. The notion that women can be just as dominant as men in traditionally male-dominated sports is still relatively new. An increasingly accepted notion but still new.

As a side note, it should come as no surprise that many female basketball players go overseas to play professionally because they get paid more than they would in the United States. But even then, they still get paid less than men.

Let’s compare shall we?

Lebron James, one of the most talented players of his generation, made around 16 million dollars this past year in terms of salary. Lisa Leslie, one of the  most dominant players and trailblazers in the history of the WNBA, was making 91,000 dollars a year toward the end of her career, the WNBA maximum. That’s quite the disparity, is it not?

All of this is to say that, to a degree, sports matter; like most things, they reflect the politics and values of our society at any given time. The fact that women are still being paid less than men in the workplace, expected to adhere to certain gender stereotypes and so on and so forth are issues that are also present in sports like the WNBA. Don’t be mistaken – yes, sports are a much less pertinent issue than the multitude of other issues facing us today but they have a context and framework from which they originate. It’s no coincidence that the WNBA is  much less popular than the NBA.

Anyway, those are just my thoughts. What do you think?